Northern Ireland's escalating drinking water crisis is in danger of developing into a major health emergency, according to doctors. The media is reporting it but has not questioned the privatisation of water companies that makes it worse. 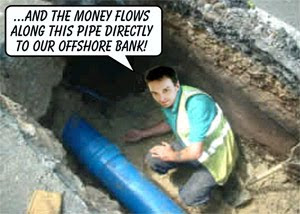 Tens of thousands of homes and businesses are still without supplies as engineers struggle to fix burst pipes. Some families have not had fresh running water for eight days!

Northern Ireland Water (NIW), the company at the centre of the crisis, said it was unable to say when supplies would be fully restored. They are blaming leaks causef during the thaw. Empty offices closed during xmas may not even know they are leaking.

Before privatisaton the priority was collecting and distributing water. Now nothing can come in the way of making a profit. Before other regions would have been quick to help. Now they are separate companies they are thinking of profits.

Northern Ireland Regional Development Minister Conor Murphy will have talks with officials to consider ongoing operations and the sort of swift action needed to deal with the situation.

More bottled water was due to be distributed in various parts of Belfast, one of the areas hardest hit. Arrangements were also being made to have tankers strategically placed across the province to help families, many of whom have been unable to use toilet facilities since before Christmas.

NIW faced more widespread public anger over the company's lack of contingency plans and its abysmal failure to provide adequate and up-to-date information.
at 10:33

You are obviously too young to remember times before the privatisation of water boards. Having lived in West London in my youth I can well remember the problems faced by the Metropolitan Water Board after a big freeze. There were often fountains in the middle of the road. Also having to go down the end of the street to a stand-pipe to fill a bucket because the pressure was too low to reach above ground level.

The reason that the privatised water companies are having so much trouble now is decades of under-investment by your wonderful nationalised industry.

What is so bad about a water company making a fair profit when a fair proportion of that is ploughed back into upgrading the infrastructure?

O/T but would you care to comment on this please?

The Price of Green

Not so young Sean. The water companies were privatised in 1984, I remember it. There were of course occasional problems before, now its noting but problems.

After 84 tariffs increased by 46% in real terms during the first nine years and operating profits up 142%. They have put some money into investment but clearly not enough.

You claim the problem is lack of investment pre 84. You have no problem with decades of water money going to profits not investment.

You want me to comment on an anti EU site that claims the 'green' government policies are putting pensioners at risk.

Try looking up what real green policies are; we would protect pensioners, for a start we would insulate their homes for free; so they would need less fuel.

This government has very little in the way of green policies, see http://greenreading.blogspot.com/2010/12/seven-months-into-coalition-wheres.html

yes the privatisation argument is a red herring. It is down to the rate of investment and unfortunately Northern Ireland is trying to catch up as they are on many fronts. I watched the Lord Mayor of Belfast on TV this morning and quite frankly if this was in in public servants hands it would be no better. Having said that there are serious questions to be asked about management but at the moment it is more about getting the waters back on.

You have no problem with decades of water money going to profits not investment.

As I commented before a fair proportion was reinvested in infrastructure and the rest went to shareholders. Many of whom are pension fund holders etc. The remainder are investment companies and individuals who then re-invest in other enterprises. They don't buy 54in plasma TVs with it! Nothing wrong with that it's what keeps markets working despite government interference.

we would protect pensioners, for a start we would insulate their homes for free; so they would need less fuel

No you wouldn't because the Green Party doesn't have any money to do any such thing. Like Labour you would steal more tax payers money, including mine and other pensioners to do it. Not forgetting to cream off at least 50% of it in overheads (paying civil servant's wages etc.)

If successive governments had invested NI pension contributions in industry and the markets, instead of spending it all on social engineering, the EU and overseas aid, pensioners could afford to insulate their own homes. They treated NI as a giant Ponzi scheme and buried their collective heads in the sand about future commitment to pensioners.

As thing are many pensioners cannot afford to heat their homes because pensions are a pittance due to government mismanagement or misdemeanor, suggesting government can do more is counter productive. They need to do far far less. The best thing now would be to abandon overseas aid, wind turbines and carbon taxes. The government can then promote the building of new coal fired stations, re-opening of coal mines and other measures that will lower energy bills. All that would be needed is an indication of this policy. Investment in coal would be forthcoming from the markets once the general policy direction is clear.

Northern Ireland water is still owned by the government. What has changed is that it is now set up as a quango in a similar way to Royal Mail or Network Rail, rather than being directly answerable to The Northern Ireland Assembly (or Northern Ireland Office during the periods of direct rule). So whatever the problem is, it isn't due to the desire to make a profit for shareholders at any cost.

Private enterprise is supposed to work because if you don't like what they are doing, you can go elsewhere, or set up your own company in competition with them. In Reading for example, Clas Ohlson and Wilkinsons are doing a much better job of selling customers what they want than Woolworths did in their dying years.

This doesn't work for something like water supply, because if you don't like what Thames Water is doing, there isn't anything you can do about it. You can't buy elsewhere, you can't start your own water company, and you can't even vote the people responsible out of office. They quite often seem to decide that paying large fines is cheaper than complying with the law, so even that line of control doesn't work.

Good points Jonathan. I was speaking generally about privatisation of water, i dont know the details about N I.

I agree that water companies should not be private. Similarly with transport, when there is no competition they create a monopoly.

Sean i fear you are correct about the national insurance, it was just a tax with a misleading name. You are wrong about insulating houses, we are already doing it in Kirklees. Look it up. We would cut wasteful spending on things like nuclear weapons. I have written about this extensively in the past.